I Have New Pariahs

So the TABC is baffled as to why Texans are upset that they're sending undercover agents into bars to arrest people for being drunk. OK, let's break this down.
This may be what folks are upset about. You send the secret police to arrest people in bars to arrest them for something harmless. We all understand that if you're being drunk and disorderly in your neighbor's front yard, you might just spend a night in the pokey. We also understand that if you get shitfaced in a snooty restaurant, they're gonna call the cops. Because those are inappropriate places to be lit up like a christmas tree. If you're drunk behind the wheel of a car, you're obviously going to find yourself at the business end of a gavel, and deservedly so.

If, however, you are in a bar, you don't expect the guy in the hawaiian shirt on the barstool next to you to call in the goon squad and have you thrown in the clink. It's just against the social contract. They defend these arrests by saying that 'that's one less drunk driver'. However, 10% of recent arrests in Irving were of hotel guests in the hotel bar where they were staying. This is the SAFEST form of drinking. Even drinking at home is less safe, since you might be tempted to go get more beer if you run out, or you might want to make that midnight run to Taco Cabana.

I feel the need to repeat my call for the TABC to be disbanded, and for all current employees thereof to be prohibited from public employment or recourse to public funds in the State of Texas.

The Hitchhiker's Guide to Texas defines TABC thusly:
TABC (TEE ay bee see) n. A bunch of mindless jerks who will be first against the wall when the revolution comes.
Posted by lunchstealer at 2:13 PM 1 comment:

I Have New Heros

It's good to hear the story behind the headlines sometimes. Thus it is with the creator of the Flying Spaghetti Monster. Seriously if you haven't checked out what's up with FSMology today, you're missing out.

I do tend to wonder if they're going to co-opt International Talk Like a Pirate Day the way the Christians co-opted pagan holidays aka Yule/Christmas. 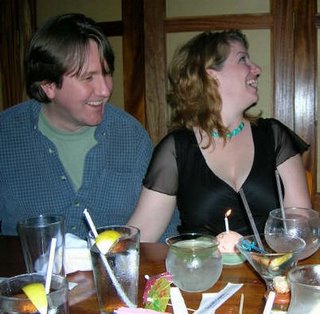 Holly and myself at Sushi Sake in Austin celebrating her birthday. The photo in the caption contest going on below is from the same event.

Thanks to Sharon for sharing these pix. 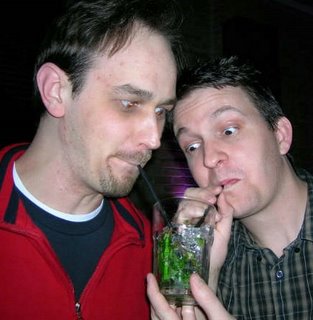 OK, here are the rules. Make a caption for this photo. C'mon, it's begging for it! Post them in the comments below. The winner shall be the first person who shall win.

Posted by lunchstealer at 2:00 PM 5 comments:

Wow, when they finally get it right, they get it wrong.

So the Dubai World Ports deal is dead. The debacle has driven down Bush's approval rating. This was the first time I actively wished for Bill Clinton to be back in the White House.

Now, this administration may be the most inept in generations. So when an ally in the War on Terrah capitolized on its status as a port city state to develop port-management expertise that is rivaled only by that other great port city/state, Singapore, they thought nothing of a deal that would have had them hiring people to run the cranes in American ports.

Senate Republicans and Democrats heard about it, and thought "OH MY GOD! We can't have ARABS in our ports!"
Posted by lunchstealer at 11:58 AM No comments: