Speaking of ID, Hit & Run recently pointed out an article (via NYT) published in the Vatican newspaper that supported the recent Pennsylvania decision barring ID theory from science classes.

Posted by lunchstealer at 3:54 PM No comments:

So a while back, a poster on Hit&Run pointed to an article in the journal Cell, which had some interesting things to say about intelligent design. The broad stroke of the article has to do with science education, and is worth reading in its entirety. However in one passage, he discusses the Intelligent Design debate as an example of some of the challenges facing science education today. The real kernel of his argument is that ID is errosive to the fundamental assumptions that make science work. If we can just say, "this is too complex to explain, so God must have done it," then we run the risk of taking that easy way out any time we run into a difficult problem.

We have recently received a wakeup call. A new survey finds that two-thirds of Americans agree with some of our political leaders that “intelligent design theory” should be taught as an alternative scientific explanation of biological evolution. What does this mean? According to intelligent design theory, supernatural forces acting over time have intervened to shape the macromolecules in cells, thereby forming them into the elegant protein machines that drive a cell’s biochemistry (Alberts, 1998

). In other words, at least from time to time, living things fail to obey the normal laws of physics and chemistry.

Teaching intelligent design theory in science class would demand nothing less than a complete change in the definition of science. This definition would give those of us who are scientists an “easy out” for the difficult problems we are trying to solve in our research. For example, why spend a lifetime, constrained by the laws of physics and chemistry, trying to obtain a deep understanding of how cells accumulate mutations and become cancerous if one can postulate a supernatural step for part of the process? Yet we can be certain that, without the deep understanding that will eventually come from insisting on natural explanations, many powerful cancer therapies will be missed.

The idea that intelligent design theory could be part of science is preposterous. It is of course only by insisting on finding natural causes for everything observed in nature that science has been able to make such striking advances over the past 500 years. There is absolutely no reason to think that we should give up this fundamental principle of science now. Two-thirds of Americans might seem to have no real idea of what science is, nor why it has been so uniquely successful in unraveling the truth about the natural world. As I write, the Kansas State Board of Education has just changed the definition of science in revisions to the Kansas State Science Standards to one that does not include “natural explanations” for natural phenomena. What more proof do we need for the massive failure of our past teaching of biology, physics, chemistry, and earth sciences at high schools, colleges, and universities throughout the United States?

I have to admit that from a philosophical standpoint, I've had a fair amount of sympathy for the Intelligent Design idea. I don't subscribe to it by any stretch of the imagination, but I understand it, and do not find it outside the realm of possibility. This is sort of a 'God as cosmic watchmaker' concept. And at the same time I knew that there was real value to it for making true scientific claims. I had no use for the 'the eye is too complex to evolve by chance' crowd.

Intellectually, I must admit the possibility that God did step down and zap the primordial ooze to create the first cellular life, and that he later interfered to add eyes, legs, lungs ears, and brains to the critters that resulted. I certainly cannot claim to have proof that God does not exist, any more than I can prove there are no flying saucers or no Loch Ness Monster. Science has no position on the matter.

But while I knew the basic reasons why ID wasn't real science, I didn't quite get what was so bad about teaching it in a science classroom. This article solidified that for me. Science, if it is to find answers to difficult questions, must have high standards for what answers are acceptable. And those answers must be natural phenomena. If science can just sit back and ascribe phenomena to magic, miracle, or just ‘space aliens’ doing things that we are too primitive to understand, then we’ll never keep seeking until we find an answer that we can understand.

The cornerstone of science is universality and internal consistency. If a theory applies in one situation, it cannot be contradicted in another. Therefore if ‘then a miracle occurs’ is an acceptable answer in one branch of science, then it must be accepted in all branches. And if that happens, then no scientific theory can be supported. There will always be doubt as to whether to believe observation, because it may be the result not of natural processes, but of supernatural meddling.

For science to be valuable, we've got to explain everything that can be explained. Intelligent Design is the theory that some things cannot be explained. While this might ultimately be true, it defeats the purposes of science, and undermines the scientific understanding that supports medicine, engineering, and most of the other disciplines that create our modern world.
Posted by lunchstealer at 3:52 PM 2 comments:

Fauna on the Cabrits 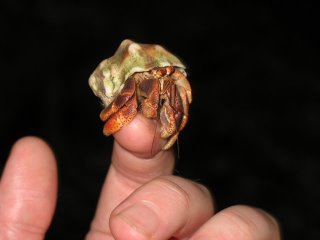 The Cabrits is a peninsula just north of Portsmouth formed by two small andesite domes. It's on the dry side of the island, and while it's not exactly barren, it's a very different environment than other places on the island. The trail to the top of West Cabrits was a popular place for black land-crabs to die, and for hermit crabs to go scuttling about. This guy is about three feet across, and is perching on the finger of a giant that lives in these parts.

Posted by lunchstealer at 3:16 PM No comments: 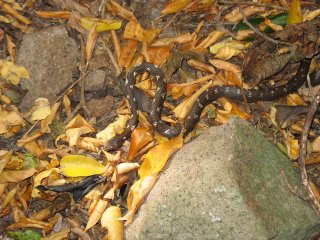 One grove snake on West Cabrits. Saw a lot of these critters there. Unfortunately I didn't get a shot of the checkered snake a couple of days later at Soufrie Springs. These guys are very good-natured. We caught one at the fort on Cabrits, and while I think he wanted to be kept in the shade, he wasn't too upset about being picked up. Grove snakes are members of the colubrid family, like the black racer and the coachwhip in the US.

Posted by lunchstealer at 3:11 PM No comments: 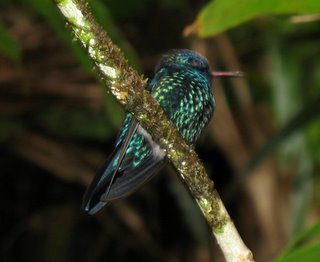 This blue-headed hummingbird was wholly indifferent to all the two-legged ape-critters pointing cameras and flashing flashes in its very near vicinity.

Posted by lunchstealer at 10:32 PM No comments: 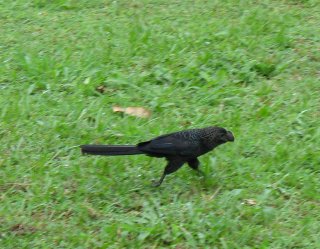 These guys are part grackle, part crow, and part doin' their own thing, man.

Posted by lunchstealer at 10:24 PM No comments: 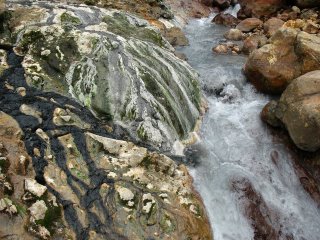 A stream in the Valley of Desolation on Dominica. The rivulets coming in from the left are full of minerals that deposit black stains on the rocks, while the stream on the right looks like nothing so much as a river of alka-seltzer.

This place stank of rotten eggs and howled like a demon. 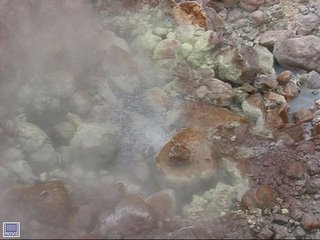 thingy at the Valley of Desolation. You can hear the steam and sulfur-dioxide/hydrogen-sulfide gasses burning out of scores of little holes in the ground around me. Jus' thought y'all would dig this.

I'm largely skeptical of blonde jokes, but my brother's found a good one.
Posted by lunchstealer at 2:31 PM No comments: