Halelujah! The Spanish have been defeated! Y'know, the Spanish-American War? Remember the Maine? That's how we got Gitmo, and took over the Philipines. And Teddy Roosevelt got to charge up San Juan Hill, while his two lovely aunts poisoned their houseguests? Wait, that's Arsenic and Old Lace. Anyway, it was a war in 1898. To pay for it, the federal government instituted a 3% excise tax on all telephone lines.

In May, recognizing that we can now safely declare the Spanish Menace no longer a threat, Congress repealed the Federal Excise Tax. So one of those little nickel-and-dime line-items has finally gone the way of, well, not too many taxes.
Posted by lunchstealer at 3:24 PM 2 comments:

The basic idea was this. Back in the day, there were people living in what we call "The Sticks". To run a phone line to 20 houses on one street was cheap, but to run a phone line to six houses along a 10 mile dirt road was ex-damn-spensive. Those wacky congresscritters thought that this was unfair, so they decided to tax city-folks' phone lines and to give that money to rural phone companies to encourage "Universal Service". And lo, the hills and dales had phones and the rabbits and the squirrels danced their little woodland dances and all was well in the world.

Jump to 2006. Having a cell phone and a landline for DSL, I currently pay around $6/month - that's about $70 a year, to subsidize these rural phone lines. Over at Marginal Revolution, some intrepid soul dares to ask, are they getting my money's worth?

The answer is that this has devolved* into yet another bit of corporate welfare which yeilds dubious results in terms of actual benefit per dollar.

* assuming it was ever anything more than corporate welfare.
Posted by lunchstealer at 2:51 PM No comments:

So TiVo's finally started coming up with some really good suggestions. Took maybe a year (the first 8 months of which were devoted almost entirely to trying to catch up on missed episodes of Angel, Stargate, The West Wing, and the Simpsons) for my TV-watching patterns to fill out enough that TiVo could start amassing sensible data on what I watch, but in the past few months it has really started putting some gems in the suggestion box. I now am checking the suggestions as much as my regular season-pass shows. I shall now report on two such suggestions which have caught my fancy.

Green Wing, on BBCA, is sort of like Britain's answer to Scrubs. But like Coupling, their answer to Friends, Green Wing is far less heart-warming and kid friendly than Scrubs. As near as I can tell, no patient ever has a line in Green Wing, and seem to spend a good portion of their time cowering to avoid injury while the staff pursues their aims of alternately screwing or tormenting all the other members of staff. Although theoretically the show centers around Caroline, played by Tamsin Greig (whom most readers of this blog may dimly recall as the nurse in charge of computer-interface implants on Satelite 9) The cast is hugely ensemble, and the narrative cuts dizzyingly between all the characters over the course of an episode (each of which are 1 hour, with commercials - very rare for a sitcom). This dizzying effect is compounded by constant switching between normal speed, slow-motion, and fast motion, designed to highlight the physical comedy. It's a bit like a Guy Ritchie film after one too many bumps of cocaine.

The second gem that TiVo* has picked up for me, also on BBCA, is Black Books. Set in an eponymously named bookshop, it follows Bernard Black, a drunken, chain-smoking, insane used bookseller, his similarly self-destructive neighbor Fran (also played by Tamsin Greig), 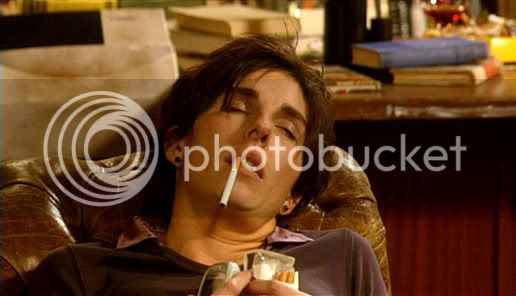 and his oddly codependent assitant, Manny. Bernard is wholly contemptuous of his customers, to the point of abuse. Somewhat in the tradition of The Young Ones and Bottom, Black Books is a fantastical, impossible voyage into the lives of worthless human beings, and it is invariably hilarious.

*As Renee points out, she may indeed have shown this to me first. All I remember is getting a bunch of grief for drunken enthusiasm for determining that that girl on the teevee was the same one that played the mom in Mirrormask. My enthusiasm turned out to be misplaced because as Holly loudly and insistently pointed out, Tamsin Greig is not in fact Gina McKee. Nonetheless, I was more than one sheet to the wind at the time, so neither my face recognition skills nor my timeline-recollection skills were at the top of their game, although my enthusiasm skills were prodigious. Coincidentally, TiVo picked up Black Books as a suggestion, but it got deleted before I could get a season pass, and there were no upcoming episodes. So I had to wait until TiVo suggestions picked it up AGAIN to successfully add a season pass. Hence my crediting TiVo incorrectly with the introduction. It did successfully introduce me to it, but it did so after Renee's intro.
Posted by lunchstealer at 11:58 AM 4 comments:

Indonesian officials have arrested the web editor of an Indonesian publication for posting the infamous Jyllands-Posten cartoons of the Muslim prophet Mohamed.

Here, I tempt the wrath not only of Indonesia, but most of Asia, Europe, North and South America, parts of Africa, Australia, and last but not least Utah, by publishing a scene from South Park's Super Best Friends episode. Here I show not only Mohamed, but also John Smith, Buddha, and Jesus. Theoretically I could also be pissing off Israel, since Jesus is talking to Moses on his two-way wrist communicator watch. They're probably the ones I should worry about the most, although I may be safe in that I am not Lebanese or Palestinian.