A smug little treatise on the value of a spontaneous, unplanned economy

Central planning could never come up with an idea as pure in its post-modern geniusiosity as this.

The iBreath. The Soviet Union created some clever chess players, but there's no way in hell they'd have come up with the idea of an integrated breathalyzer/FM transmitter which attaches seamlessly to your iPod. You can now play you iTunes through your car stereo, and be sure you're legal to drive.

Hat tip to The Agitator.
Posted by lunchstealer at 4:33 PM No comments:

Posted by lunchstealer at 1:52 PM No comments:

One of these things is not like the others 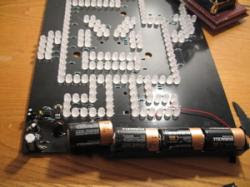 Can you tell which one of these is not a bomb? If you picked the one with the lite-brite cartoon character on it, you're qualified to replace Assistant Attourney General John Grossman, who is rumored to be stepping down after discovering that he is, in fact, a moron.

From the AP story on Ignignoktgate:
"This device looks like a bomb."

Some in the gallery snickered.

If you want to kill people you don't make your bomb flip people off. You probably make it look like a massive government transportation and construction project. But I guess that's already been done.

State Attourney General Martha Coakley, Assistant Attourney General John Grossman, and Homeland Security Department spokesman Russ Knocke all refer to this as a bomb hoax. Well a hoax is an attempt to make something look like a bomb. This was an attempt to make people see a light that was a funny shape. We've already spent $750,000 shutting down Boston because the police couldn't tell that these weren't fake bombs, but were just funny signs. That is an honest mistake on their part. But once it was clear how the signs worked, and that they were intended to be seen at night, they really should have gained a little perspective. As it is, they're going to waste another $500,000 or more of taxpayer's money prosecuting people with criminal charges for something that is at worst misdemeanor disturbing the peace and maybe vandalism, although it is clear that some care was taken to see that nothing was damaged.

Coakley's already doing a terrible job investigating the malfeasance on the Big Dig project which actually did result in loss of life. Maybe spend a little more time on crimes and less on what is truly an innocent misunderstanding. To do anything else is criminal.
Posted by lunchstealer at 11:09 PM 1 comment: